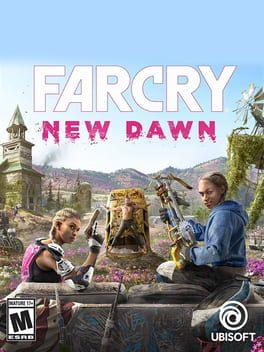 Surprisingly, a new Far Cry was announced at the end of 2018, not even one year after Far Cry 5. And in fact, this game even ties in with its direct predecessor in terms of story. What we know: It's set again in Hope County, but this time in the post-apocalypse. Besides normal gunshots there are some Makeshift weapons, including a crossbow that shoots with saw blades. The villains are a faction called Highwaymen, led by the twin sisters Mickey and Lou. You manage a base and arm it with resources and NPCs. New Dawn will co-op Far Cry 5, but this time your AI companions will have their own skills to improve. Also new: In expeditions we leave the Open World. These are small missions where we earn experience and items.

Far Cry: New Dawn introduces a new protagonist who is stranded by a train crash in this part of the world, marked by the war between two opposing factions of survivors: on the one hand, peaceful farmers and idealists who are getting a fresh start from their own hands. On the other hand, the so-called Highwaymen, plunderers and robbers who simply take what they desire by force. They are led by the two twin sisters Mickey and Lou, who, in their own way, are likely to stand in the tradition of the kinky, charismatic and one-dimensional clichéd Far Cry villains.

It goes without saying that as a hero you stand on the side of the good-hearted population. This is where the first innovation in comparison to its predecessor comes into play: the basis. Similar to the camp in Red Dead Redemption 2, it serves as a retreat between missions, but also as a meeting place to talk to other members of the Resistance, get orders from them, or expand the camp to unlock new features.