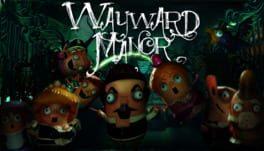 Wayward Manor invites you to jump into the afterlife of a disgruntled ghost, trying to reclaim his house from its newfound owners. Set in the 1920s, this puzzle/adventure game transports players to an era of dark screwball comedy where they must unlock the secrets of a twisted mansion. Players will discover the quirks of Wayward Manor’s unwelcome guests and choose how to prey on their darkest fears.

The Budds, a dysfunctional family of misfits and eccentrics, have brought their own abysmal possessions into your humble abode and stifled your power. Each level is a playground for scares where players earn fear to take back control of the room. If you want free reign over your mansion once again, you must drive the Budds mad with fear using only your imagination and their hideous belongings.

What started as a Lego prototype that The Odd Gentlemen and Neil Gaiman played together one afternoon, soon became a unique collaboration to tell a story through a non­linear puzzle/adventure game hybrid, where the player learns about the characters and world through their observations and discovery. First launched on the website WhoHauntsNeil.com, Wayward Manor has been slowly unveiling its story and world to a whole new audience. Wayward Manor is Neil Gaiman’s first foray into video games.