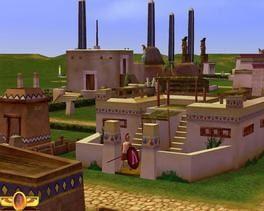 Children of the Nile: Alexandria is an addition to the base Children of the Nile game, adding a new mini-campaign focused on the rise of the city of Alexandria.
Using the unique city-building dynamics of Children of the Nile, you will carve out a new dynasty to rule all of Egypt, and build the greatest city of the ancient world! Each person in your city is a fully developed person, with wants and needs. Tend to their needs and they will work for you so that you can create a powerful empire and a lasting legacy.
In Alexandria, you assume the role of the new Pharaohs of Egypt, in a three-scenario mini-campaign set during and after the final stages of Alexander the Great's career. Consolidate your power as Alexander's former lieutenants vie for control of his empire, all while growing a massive new Egyptian capital and constructing new massive monuments: the Great Lighthouse and Great Library of Alexandria!